- IMPORTANT -
We have detected you are using a very old web browser - we highly recommend that you upgrade your web browser!
If you are a DALTC Member using your current browser to renew your membership online may cause problems.

Durham Archery Lawn Tennis Club is understood to be the second oldest lawn tennis club in the world still operating on its original site. It was formed originally as an archery and croquet club in 1871. We believe tennis was introduced in 1874 and was being played regularly at the club in 1876, just before the first Wimbledon Championships.

Looking through internet sites there are many statements from Clubs claiming to be either the oldest, the second oldest or one of the oldest still in existence either in the world or still on its original site. We have carried out some research to try to clarify the position and establish Durham Archery’s place in tennis history. The All England Lawn Tennis Club has confirmed that it does not hold comprehensive records about the history of tennis clubs but they have said as far as they are aware we are the second oldest still operating on the same site.

Before explaining the club’s history it would perhaps be helpful to set this in the context of the development of tennis generally.


A short history of Lawn Tennis 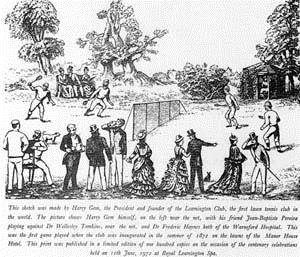 Not surprisingly Lawn Tennis was not invented on a specific date. The considered wisdom is that it was developed from games using the hand to strike a ball and also real tennis. However the key date for the emergence of tennis as we know it is 1873 as explained below.

It is said that the modern sport is tied to two separate inventions. Between 1859 and 1865, in Birmingham Harry Gem, a solicitor and his friend Augurio Perera a Spanish merchant, combined elements of the game of rackets and the Spanish ball game Pelota and played it on a croquet lawn in Edgbaston.

In December 1873, Major Wingfield designed and patented a similar game—which he called Sphairistike from the ancient Greek meaning "skill at playing at ball", and was soon known simply as "sticky".He based his game on the evolving sport of outdoor tennis including real tennis. Much of modern tennis terminology also derives from this period. Major Wingfield borrowed the French vocabulary of real tennis and applied this to his new game.He patented the game in 1874 with an eight-page rule book titled "Sphairistike or Lawn Tennis",but he failed to enforce his patent.. In these rules the service had to be made from a diamond-shaped box at one end only and the service had to bounce beyond the service line instead of in front of it. He adopted the Rackets based system of scoring where games consisted of 15 points (called 'aces').

In "Lawn Tennis by Tyne and Wear” by Norman Patterson produced in the early 1920’s it is reported that locally the modern game of Lawn Tennis was originally established in Northumberland and Durham in the mid -1870s.

Again to establish context it is worth mentioning that the first Wimbledon Championships were held in 1877. This was a small affair of just 22 competitors participating in a men’s singles competition. Around 200 spectators turned up paying just one shilling to watch Spencer Gore win the final.

The Durham Archery and Croquet Club was founded in 1871. The club still has a croquet medal dating from 1871 and Ladies croquet badges from 1873 to 1924.

The land for the club was originally leased from Canon Henry Jenkins one of the Canons of the Durham Dean and Chapter who administered the Durham Cathedral estate. He had been granted a large area of land known as Howle Crofts (which included the Club site) as part of his office to secure revenues known as a prebend. The land was transferred to Durham University in 1905 in accordance with the transfer of land from the Church Authorities to enable the establishment of the University.

Notes on the early history of the Club have been deposited with the Cathedral Library by Charles Rowaldson one of the founder club members and the Cathedral Land Agent at the time. These reveal that in the club Minutes it was reported that tennis was "admitted” in October 1874 when a Mr C.E. Bell was thanked "for his gift of a set of lawn tennis”. The All England Lawn Tennis Club has confirmed to the Club that in 1874 Major Wingfield had patented lawn tennis equipment and this was on sale from February in that year.

Norman Patterson in his book "Lawn Tennis by Tyne and Wear” (1921) indicates that tennis did not start at the Archery Club until either 1875 or 1876, just before the Wimbledon Championship started. What is not clear is whether some play actually took place in 1874 after the gift of the tennis set or in 1875 although it is reported that it is known for certain that there was play in 1876. The first men’s singles competition took place in 1878 won by A. Monnington as shown by the Winners Board in the Clubhouse. The Club also has Ladies Tennis Championship badges from 1879 to 1938.

Edgbaston Archery and Lawn Tennis Society is understood to be the oldest surviving Tennis club in the world still operating on the same site. Their web site indicates they have tennis fixture cards dated 1875.

On the basis that tennis was certainly played in 1876 it is understood that Durham Archery is the second oldest surviving Lawn Tennis Club still operating on its original site. The All England Lawn Tennis Club have indicated if they ever publish a list of oldest clubs Durham Archery will be second on the list of clubs still operating on their original site .

Notes on the early history of the Club deposited with the Cathedral Library indicate that the official club colours are Dark Green and Terra –Cotta. Also it is of interest that in the early years of the Club the Committee resolved that Ladies must form only one third of the Committee members. In 1921 it is reported that there were 6 grass courts and one ash court. The Lady membership was said to be particularly strong at the time and won the Senior Northumberland and Durham League Championship in 1920, 1924 and 1926-8. There were no Gentlemen’s teams. The membership at the time was; 32 Gentlemen and 47 Ladies. The annual subscription was £1.15 shillings.

The membership grew during the 1920’s and 30’s to over 150 and there were 7 grass courts. The Ladies again won the Northumberland and Durham Championship in 1937.

By the early 1960’s the grass courts had been allowed to deteriorate to such an extent that they were unfit for play and only 3 red shale courts were in use. In 1963 the membership had dwindled to a handful of members and the financial state of the Club was said to be in crisis. An emergency meeting was called to try to save the club from closure. It was decided that the Club could only be revived by arranging more social activities, providing coaching for young players, arranging more publicity and by encouraging members to mix by introducing a rota system of play . This policy could not have been more successful. Since then the Club has developed significantly.

During the 1970’s an attempt was made to revive archery at the club. However a desire to restore the grass courts for tennis and the not unexpected concern of nearby residents at the prospect of arrows heading for their back gardens meant this was short lived.

In 1973, at a cost of £3,500, a new pavilion was built. This was largely erected by club members under the guidance of the Club Secretary at the time Allan Gibb. This pavilion is still in use today and is lasting remarkably well.

In 1976 the Club’s Men’s team won the Northumberland and Durham League for the first time and followed this up with further titles in 1978 and 1980. The Club now has over 20 Senior and Junior teams competing in local and National Leagues. Three grass courts are meticulously maintained and the Club has 6 all-weather courts with floodlights. The current membership exceeds 250 and there are regular social events. Durham University have been the Club’s Landlords for over a hundred years and we are pleased to be working in partnership with them. The Club is flourishing. The next major milestone will be the Club’s 150th anniversary in 2021.

Thanks and Research evidence

We are indebted to Norman Patterson. He was the Honorary Secretary of the Northumberland and Durham Tennis League from 1907 to 1934. (For some reason many of the Secretaries have amazingly long periods of service including the current Secretary Keith Whitfield who has served since 1968 – 45 years to date and still going . Obviously tennis does keep you very fit. ) Norman Patterson compiled a book in 1921 entitled "Lawn Tennis by Tyne and Wear” which chronicles the history of all the North East Tennis Clubs in existence at that time. Many thanks to the Durham County Council Reference Library staff for finding this work. It is available in the Durham City Library for any "anoraks” who would like to research this further.

We are also grateful for the assistance of:

Gabriel Sewell at the Cathedral Library which has some notes on the early history of the Club deposited by C. Rowaldson the former Cathedral Land Agent and a founder member of the Club;

Matthew Wright in the Estates Department of Durham University who explained the complicated history of the ownership of the club’s land;

Audrey Snell at the All England Lawn Tennis Club Museum at Wimbledon.

The Club would like to thank Mr Ian Mackenzie who researched, compiled and wrote the above article